A year by year account of the early history of the Noosa Tigers.  This is a work in progress and if you have any comments, information, corrections, photos etc please contact the club.

The club would like to thank the following people for their contributions and comments:

On June 1st 1952 a Brisbane fixture game was played between Kedron and Yeronga at the Cooroy Showgrounds.

Ron Vernon and Carl Radke placed an advertisement in the local paper advising of a public meeting at the Maroochydore RSL on September 29, 1969 to discuss the formation of a Sunshine Coast Australian Football League.  Thirty four people, including Nosa’s Len Daddow.  As a result of follow up meetings, provisional office bearers were elected at public meetings held at Caloundra, Maroochydore, Nambour and Tewantin.  Due to lack of support Caloundra became inactive.

1970 saw the formation of the Noosa District Australian Football Club.

A public meeting was held, on January 26th 1970, in the Lounge Bar at the Royal Mail Hotel Tewantin to discuss forming an Australian Football club.

The football year started with a match between Morningside and Mayne at the Cooroy Showgrounds.  The first Sunshine Coast Australian Football League match was played at Cooroy, under lights, on Anzac Day where Noosa defeated Nambour.

Discussions were held with Noosa Shire Council in an effort to secure Reserve 343 at Weyba Creek.

The club obtained, from the Lands department, a lease of 9½ acres (3.85ha) at Weyba Creek for the purpose of developing a playing field. This represents about 65% of the current area at Weyba Road.

The relationship with the Sunshine Coast League took a turn for the worse and prompted the following in the Presidents report for the year: “Throughout the season the club-league relationship left much to be desired. Without consulting the Noosa Club, the League gave directions for the breakaway of Cooroy and attempted to do the same with Eumundi. In our opinion, many unconstitutional moves were made by League management and much ill feeling was generated against the Noosa senior team and club. This eventually gave way to a notice of motion to expel the Noosa District Australian Football Club. This motion was not put but an amendment to the effect that we re-elect our office bearers to the satisfaction of the League and that the club be suspended after the final series was over and then apply for membership at the League annual general meeting, was put and passed.”

A Cooroy Australian Footbal Club was formed and, as a result, the Noosa District Football Club no longer had a home ground. “Home” games were played at Peregian Beach.

As a result, the President identified the big off season job as the development of the “Lake Weyba Ground” (sic). More than $6,000.00 was spent on ground development. (As a comparison average yearly earnings in 1973 were around $5,600.00).  The State Government made available financial assistance to the extent of $1,660.00 for the construction of showers, dressing rooms and toilets.

AFL great Alan Killigrew coached Noosa up until the finals when Ron Fox took over.

It was reported  in the Noosa News in May 1974 that some fencing, a shed and temporary toilet facilities were erected at Weyba Road.

In 1974 a house was purchased and moved from 12 Hastings Street. This was raised and change rooms and a canteen provided below. The cost of this exercise was assisted by a subsidy from SCAFL.

On the 30th of March 1975 the Noosa Australian football ground was officially opened by the Hon. John Herbert MLA, the Queensland Minister for Sport.

In 1975, logs were placed around the perimeter of the field, on which trees had been maintained, providing a pleasant picnic aspect. The clubhouse had been updated and negotiations were underway for floodlighting of the field.  (Noosa News 30.04.1975)

In April a subsidy, in the amount of $3,285, for works associated with the new playing field was received from the Queensland Government . (1975.05.08_QLD GOVT SUBSIDY) 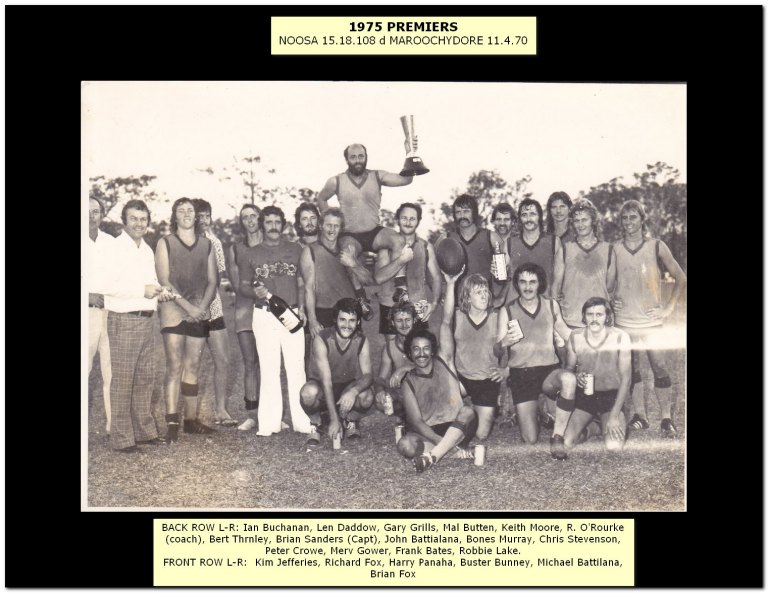 A newspaper report from 1979 states that “one of the criticisms Noosa has had to suffer was that the side lacked heart”……”Richard Forsyth, who has had many critics for the coach of a side which lost only one game throughout the season, has had the last laugh….”

In September a Government subsidy, in the amount of, $2,440.00, was granted for the erection of a machinery and implement shed and connection of the clubhouse to the Council sewerage main. 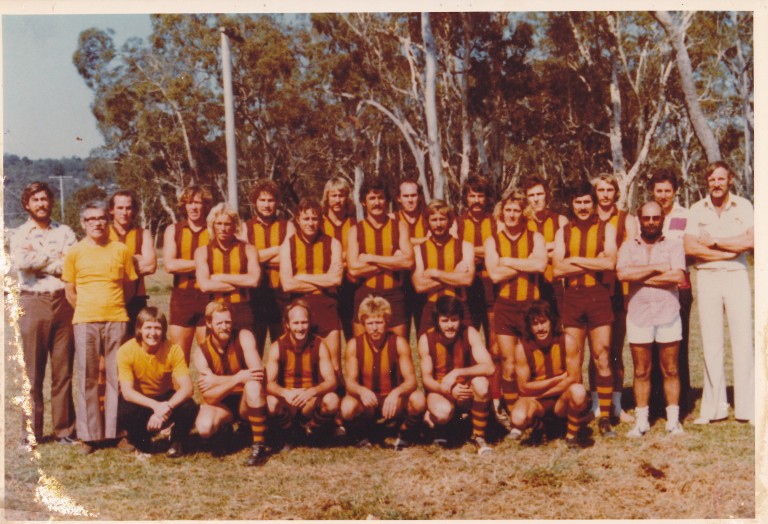 In June 1978 a Quensland Government subsidy, in the amount of $1,356.66, was granted for the connection of the sewerage main to the clubhouse

Tiger Talk, the club’s weekly newsletter reported on June 24, 1979 that … “It is proposed that in the near future new club rooms will be built to give the Club members, players and supporters better facilities at our ground.”

In October Government subsidies, in the amounts of $3,500 and $2,466.66, were given to Noosa for coaching of juniors and towards the cost of clearing land in preparation for establishment of a junior playing field.

Further Government subsidies, in the amounts of $2,000 and $2,840, were given in November for coaching of juniors and the construction of a toilet amenities block.

Players from the Noosa Tigers Seniors, Reserves and U17s won the SCAFL Best and Fairest awards:

A Special Meeting of the SCAFL was  held on October 20, 1982.  Among the items was discussed was the 1982 Garnd Final.  W. Parry, President of SCAFL,  reported on the 1982 S.C.A.F.L. Grand Final and stated what a “disgraceful display it was by the two Senior sides playing on that day.”  Lengthy discussion took place regarding this matter with al Directors and Executive Members voicing their opinions.  After much discussion by all present it was Moved “that both the Noosa and Maroochydore Clubs be fined the sum of $500 for their Senior Sides behaviour on Grand Final Day. All other clubs to be notified of this decision and that this sort of behaviour by servants of any club will not be tolerated in the future.”       The above Motion was put and the votes talled at FOR – 4, AGAINST -4. The President Mr Parry then exercised his power to vote under the S.C.A.F.L. Constitution, and then voted in the Affirmative and the motion as put was carried.

The Presidents Report in the 1982 SCAFL Annual Report states that…”The incidents that happened in the Senior Grand Final has done this League considerable damage, and now it is up to all of us to work together to ensure that there is not a repeat again. Maybe Clubs should consider imposing better discipline before incidents instead of after it has happened. The decision made by the Board after the Grand Final may have set a precedent but I feel sure that all Clubs will now realise “THE OBJECTS” of their Clubs and this League.”

The aftermath of the 1991 Maroochydore versus Caloundra Grand Final, which was played at Noosa, carried on over into Season 1992. With newspaper headlines like “Footy Brawl Stuns Police”, “Rules Brawl Shame”, “Code To Act On Thugs”, “Black Day For Aussie Footy”, the Sunshine Coast AFL administrators had to weather the storm and a barrage of press questions about the future of our national game on the Sunshine Coast. Positive action saw the “Send Off Rule” introduced and it was hoped that this would make the penalty felt immediately during the game where the offence occurred.

The first fixture commenced during the last weekend in March and a very zealous umpire at the Gympie versus Nambour game secured a front page headline “Chaos Rules As Seven Players Sent Off”. In the opinion of the SCAFL President, “we needed that like a hole in the head. Suddenly we were without friends”. The QAFL became involved and secured a back page headline “Send Off Rule Could Spell Death To Footy”. Even though the press, the clubs and the QAFL wanted action to curb unacceptable on-field behaviour when action was applied by the SCAFL administrators it was deemed to be too severe and a watered down “Send Off Rule” made the League into paper tigers according to the President.

Within 2 rounds it was obvious that Pomona could not field Seniors and Reserves and so they moved back to a Reserves side only.

Kawana went ahead with an AFL practice game between the Brisbane Bears and Essendon. This game not only lost them thousands of dollars but also put them in a financial position from which they were never to recover. The club found itself in the hands of the receivers to the tune of some $32,000 in the red.

Midway through the season Gympie encountered a player revolt which saw their numbers decrease to the point where they played out the remainder of the season with only sufficient numbers for one team, whereby they took to the field and played the Reserve game, then, with the same team, returned to the field for the Senior game.

In the Coast competitions greatest shake up the four Coast senior clubs, (Noosa, Maroochydore, Caloundra and Nambour) voted unanimously to play a trial season in the 1993 Brisbane Australian Football League – a separate competition to the higher grade Queensland Australian Football League. A key component in the move to BAFL was Tony Norman, a former player/coach of Nambour, whowas the instigator of the move to the BAFL. He had the vision and foresight to liaise with the four Clubs and present a collective submission to the BAFL Administration.

Each club was expected to play 14 of the 22 BAFL rounds on the Sunshine Coast. It is the alternative to staying a four club senior competition on the Coast in 1993, when clubs would play each other up to seven times.

The move was prompted by the debt problems of Kawana, Gympie and Pomona, who faced expulsion from the SCAFL for non payment of outstanding debts to the League by December 31, 1992. The Sunshine Coast Junior competition will continue to operate in the region.

The Noosa Tigers were the only club that would have a color clash with BAFL club Aspley. Kingsley St. Clair, president of SCAFL, said that Noosa would retain its traditional brown and gold jersey, apart from when playing Aspley. It would probably use the Sunshine Coast jersey on that occasion he said.

The Noosa Citizen reported on November 25, 1992 that Noosa Tigers members voted unanimously to join the BAFL. The decision was made at a special meeting after the collapse of three of last season’s club sides on the Sunshine Coast.  To see more of what the papers were saying CLICK HERE

The Ladder at the end of the home and away season was headed by Caloundra with 21 wins from 21 games followed by Maroochydore 16, Nambour 15, Noosa 12, Kawana 11, Gympie 6.