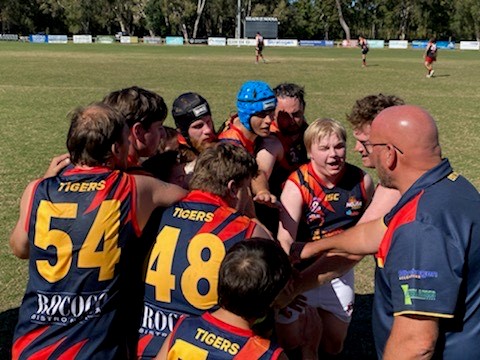 The Noosa AFC Inclusion team played its first game last Saturday at home taking on a combined Yeronga AFC / Surfers Paradise AFC. This is the first time clubs and the AFLQ have come together to create a competition for Inclusion Athletes over the age of 16 years with an Intellectual Disability to participate. The clubs competing are Noosa AFC , Yeronga AFC and Surfers Paradise AFC.

Players have been training for over 6 weeks to prepare for this match. The game was played in great spirit with a lot of spectators commenting on the skill level and will to compete, with all players committed to the match.

There will be further games scheduled throughout the year, with this coming Saturday (19th June) sees Noosa travel to Yeronga, then down to the Gold Coast on July 3rd to play Surfers Paradise.

Upon completion of these matches a Queensland State Team will be selected to travel to Adelaide to compete against other states over a week-long AFL Inclusion Carnival.

Anyone wishing to join the Noosa Tigers Inclusion team, come down to training on Wednesday evenings at 5.00pm and join in or contact Coach Rob Purves on 0433 240 005.