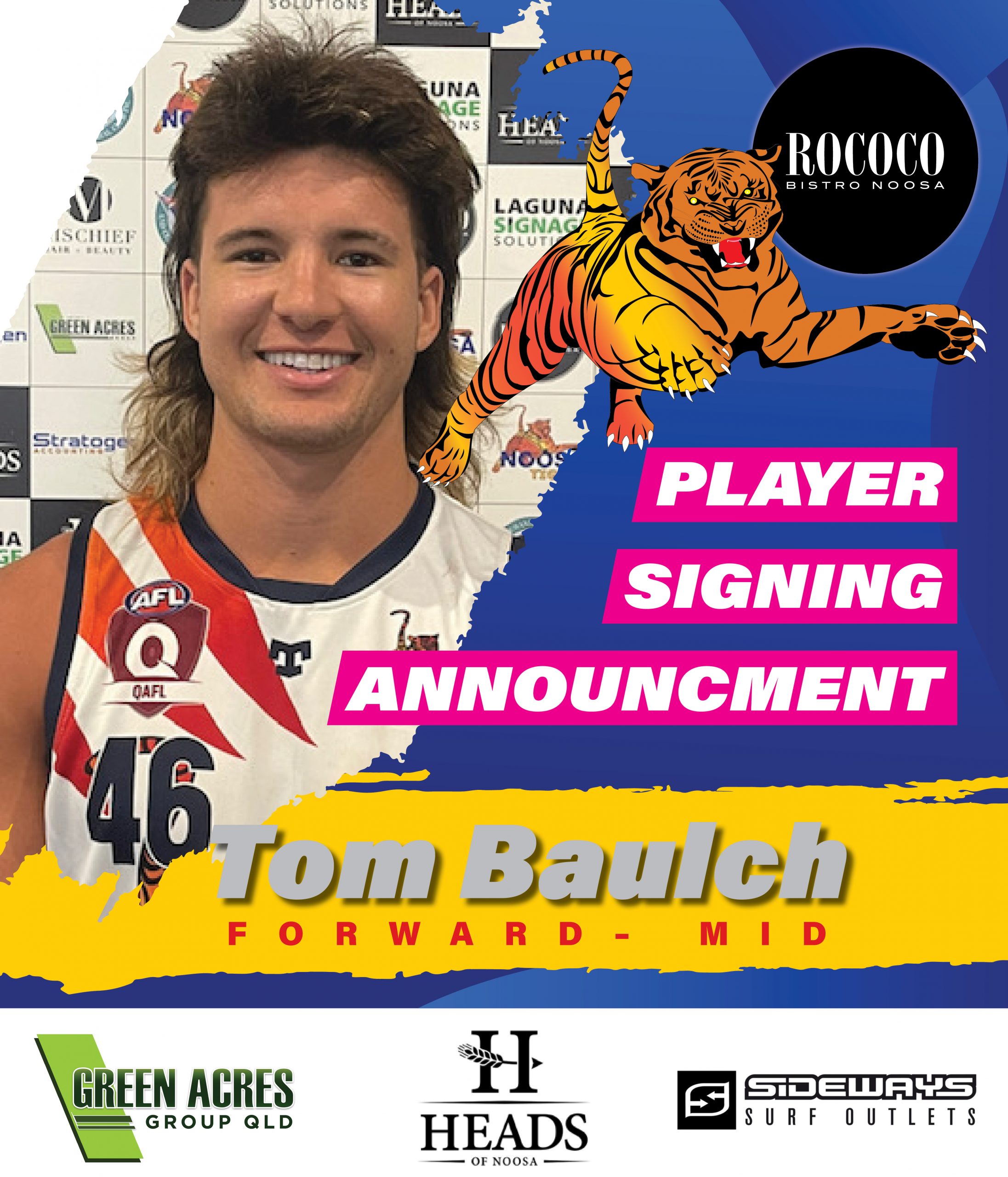 In what has been a huge week of signing announcements we end the week with another massive additions to our playing list in Tom Baulch.
Baulchy is one of the best young players in the QAFL having been named In last years QAFL team of the year. With Aspley dropping from the VFL Baulchy decided to move home to Noosa and concentrate on his Elite athlete training business. We invited Tom to train with our group over the summer in which the playing group really embraced him. Having played for Sherwood in the QAFL over the past few seasons Tom really found it hard to make the decision to come to Noosa and play against his old club but due to travel and work it ended up being the right decision.
Tom answered a few questions for our supporters on the eve of our 2022 Season.

Name: Tom Baulch
Age: 22
Position: Forward/Mid
Nickname – My mates know me as Prime however Rourkey calls me Rockstar
Noosa AFC: Welcome back to the Noosa Football Club, what made you decide to play for us in 2022?
Tom: Moving back home to Noosa played a big part and the opportunity to stay at QAFL level. The direction that the club is going played a big role.
Noosa AFC: What would be your best position?
Tom: Forward/Mid
Noosa AFC: What club have you come from?
Tom: Aspley (VFL) – Sherwood (QAFL)
Noosa AFC: What do you do for work?
Tom: Elite Athlete Trainer & Tik Tok sensation.
Noosa AFC: Career Highlights?
Tom: – Playing at VFL, WAFA & QAFL Level
– 2021 QAFL Team of the year
– 2019 NEAFL Rising Star
– 2017 WAFA Colts Team of the Year
Noosa AFC: Do you have any other hobbies away from Footy?
Tom: Fitness, Time with Family and social life.
Noosa AFC: What AFL club do you support, who is you favorite former player & current AFL Footballer?
Tom: Bombers – Mitch Georgiades – James Hird
Noosa AFC: Any new teammates that you have connected with so far?
Tom: Our skipper Aaron Laskey has been amazing.
Noosa AFC: What do you want to achieve at Noosa AFC both personally & as a team in 2022?
Tom:
Personally – Nothing individually
Team – Win a Premiership with this group
Noosa AFC: Baulchy, there is no doubt you will have a huge impact on our club both on & off the field. You are an excitement machine and another addition to our strong forward line which will be a problem for opposition. We are super excited to see you playing in a Tigers jumper again very soon.
UP THERE NOOSA!!!