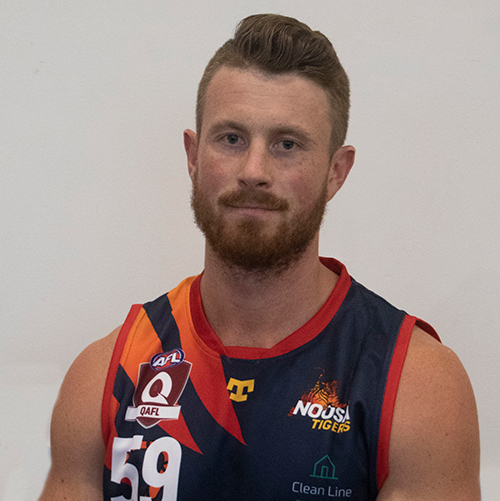 After four straight years of finishing second in the Noosa Tigers Senior Best and Fairest award, skipper Aaron Laskey has finally broken through to be Noosa’s club champion in season 2021.The triple premiership player and dual premiership captain polled consistently throughout and finished strongly to overtake gun defender Riley Buntain and run away with the prize for the first time. Laskey as usual was humble in accepting the accolade saying:

Utility Seb Rogers finished third in the voting after polling strongly in the middle rounds whilst power forward Aaron Wilson was next in line after a super impressive season up forward for the Tigers. Young defender Ben Guthrie rounded out the top 5 after a very impressive and consistent year in defence.

Evergreen Gary Wallace won the reserves medal on the last votes of the night pipping Angus Johnston by the barest of margins. The 2010 senior premiership player, life member and all round champion was rapt to take home the chocolates saying ’You know what I’ve really enjoyed this year. Just helping the kids come through has been great and I seriously can’t wait to go around again’

Lacey Wilson took home the Colts prize ahead of Marty Kelly with both having super impressive seasons in their first taste of QAFL footy. Wilson has been a standout on the sunny coast over the past 3 or 4 seasons with high possession games and exquisite skills on both sides whilst Kelly was rewarded with a taste of Senior footy throughout 2021 for his on field prowess.

All eyes this weekend on the Tiger teams playing finals with our Senior Women the main attraction on Saturday at home from 4.45 pm. The girls play Pine Rivers for a spot in the Grand Final on Saturday September 4th.

Our Noosa Tigers inclusion team coached by Rob Purvis will be a preview to the women with their game starting at 2.30pm.

Four of our Junior teams are involved in finals on Sunday with Noosa hosting 5 preliminary finals at Weyba rd.

In fact our under 13 girls and under 12 boys will feature in the first two finals of the day at Rococo oval whilst our under 14 boys and under 15 girls are at Kerrin and Moreton bay respectively.

How exciting! Its finals time!

Good luck to all teams wearing the Tigers jumper this weekend!