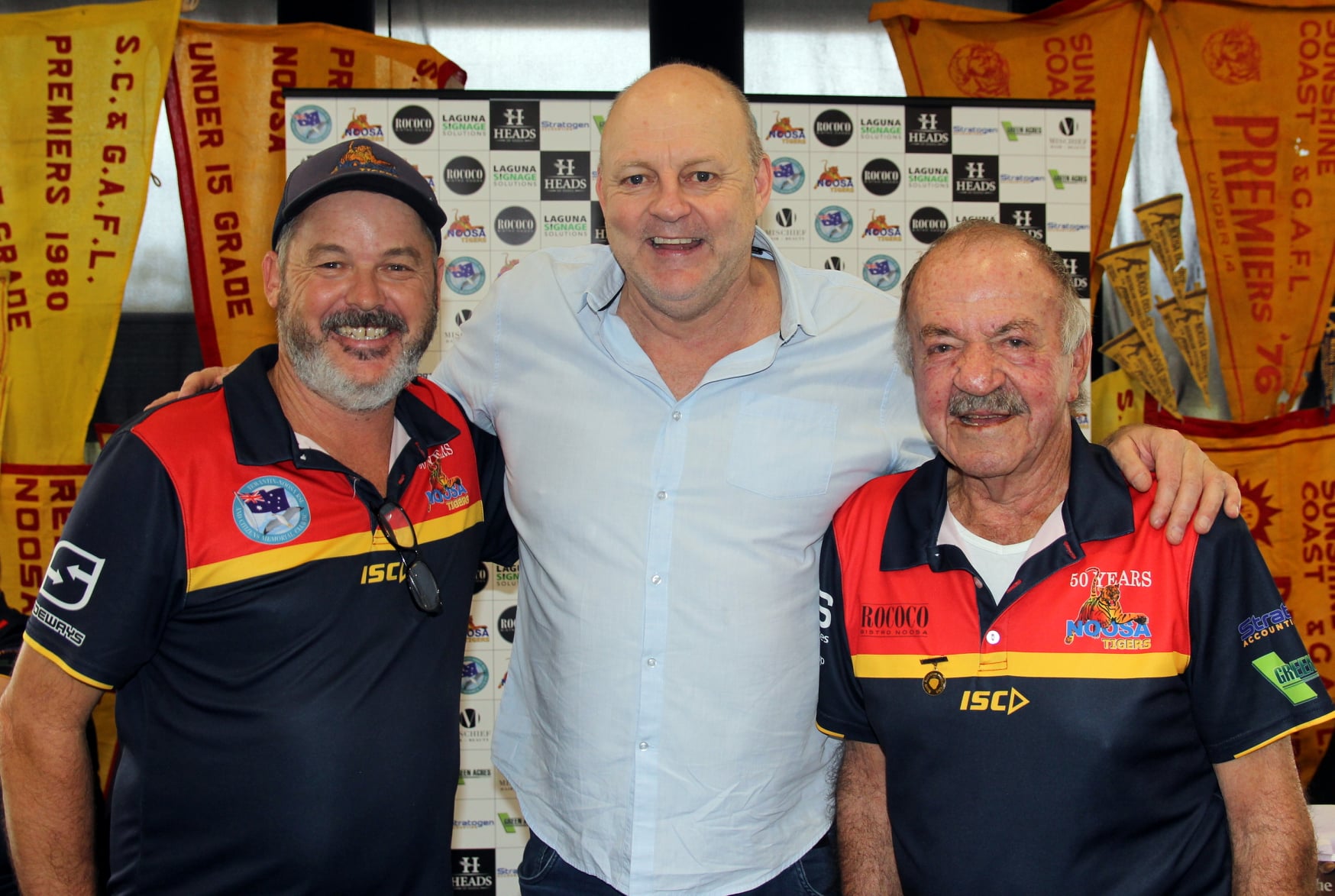 What a wonderful day and night had by all who joined the Noosa Tigers AFC 50 Year celebrations last Saturday at Rococo Oval. People from all eras caught up, told stories and reflected on nothing but great times shared throughout the club’s journey. Club legends like Len Daddow, Buster Bunney and Alby Hancock greeted the crowd with their fond Tigers memories! The memorabilia table (thanks to club legend Judy Meager) kept many guests entertained throughout the day, with historic photos and game day stats providing plenty to peruse.

Geelong great Billy Brownless had us all in hysterics during the half time break, whilst our little under 8s did a fantastic job out in the middle during the same time. After the Seniors match day awards, life member Ashley Trompf read out the final and most recent ‘team of the decade’. Father/Son entries of Brett Buntain (1990s) and Riley (2010s), along with Tony and Jai Fitzpatrick in the same fashion, were highlights of the unveiling.

Amazing to see so many Noosa greats there, including Bart and Thel Jaques who have been so influential in the ongoing success of this footy club. 1970s team member, 1980s coach of the decade and Melbourne FC legend John Townsend was in the crowd, as were coaching greats Brett Maloney and Wayne Fletcher. Bones Murray was named captain of both the 1970s and 1980s teams, whilst the fearless Aaron Jaques was captain of the 1990s squad. Mark Vagg, one of the greatest ever players from the Sunshine Coast, got the gig for the early 2000s team and Adam Bovalino deserved his dual nominations and being named leader of the most recent group. To see the Hunt brothers, Mick Anderson, Damian Hahn, Matt Hicks, Andrew Ford, Damian Smith, Hugh Stewart, Ryan Sawers, Brett Duke, Brad Cross, Todd Hutchen, Mark Owen, Reece Langan, Kim Farrell, Donny Blair, Terry Drew, Garry Shaw, and Brian Fox to name a few, fantastic! All champions of our great club.

A great night had by all and thanks to all that helped in setting it up. All three men’s senior grades had a real crack in front of a bumper crowd, just falling away after half time. No let-up in this comp, as the men’s Tigers teams head down the Bruce highway to face Morningside in another big clash.

The Noosa Tigers Senior Women are sitting on top of the ladder and played bottom placed North Shore on Saturday. The Tigers jumped straight out of the blocks, posting 6 goals in the first quarter. Georgia Kenrick relished her first time as a midfielder and Chloe Gallio set the tone early by winning clearances and laying some big tackles. Our joint skippers, Cass Young and Eliza Trompf were dominant, but it was the huge shift towards a totally TEAM FIRST mindset that provided the catalyst for a record score for the season. Noosa Tigers posted the massive score of 19.9 (123) to 0 in 60 minutes of footy and it was simply great to watch.

This Saturday 5th July we have a top of the table clash, with Noosa Tigers taking on Alexander Hills in a 1 v 2 clash at Rococo Oval in Noosa. Should be a beauty, so get down to support the Tigers from 2:00pm. Bar and canteen will be open!

Good luck to all Tigers teams on the weekend