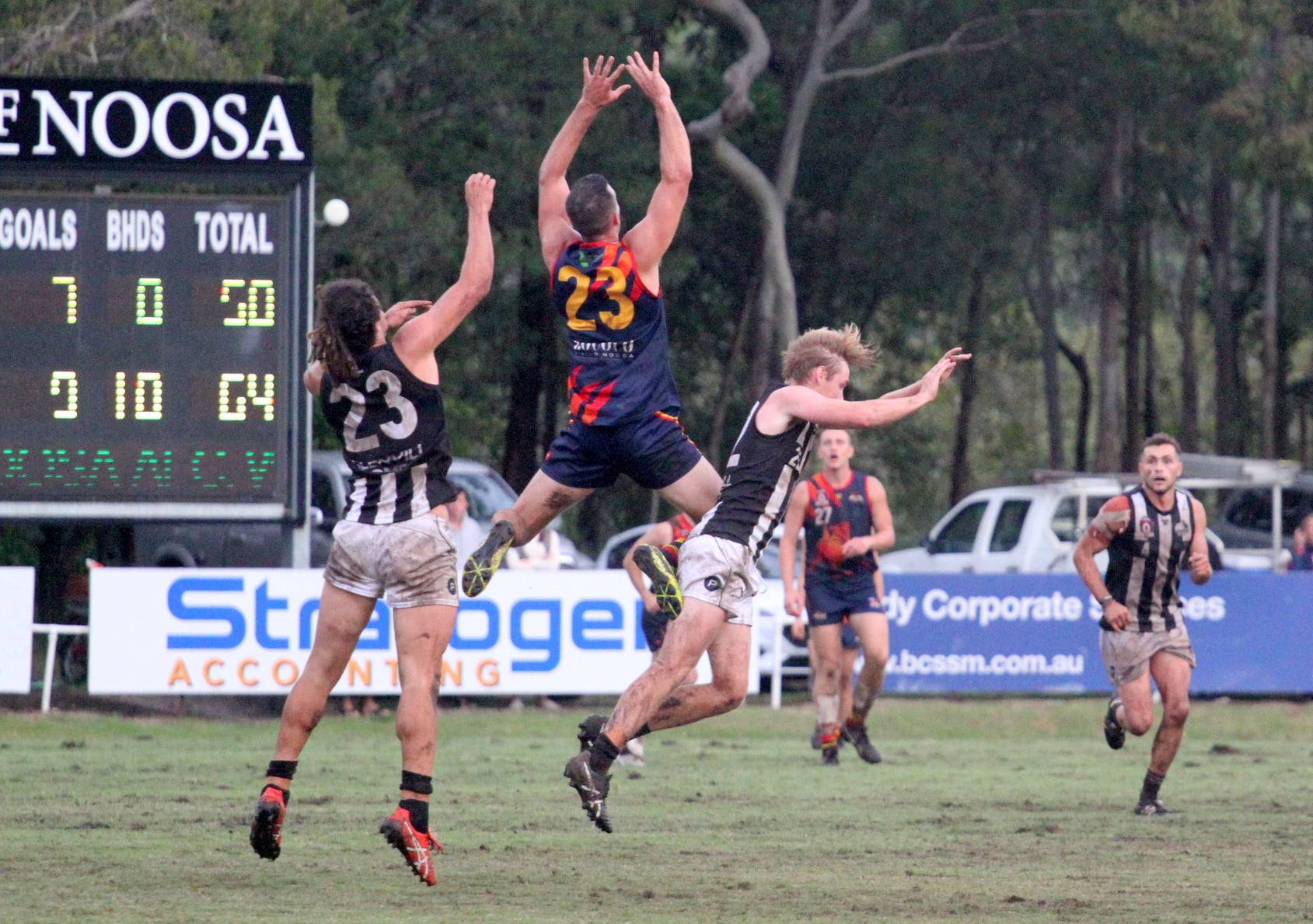 The Rococo Noosa Tigers came home with a wet sail but were still unable to open their QAFL account as the Sherwood Magpies prevailed by just under 4 goals. After 65 mm of rain hitting the resort town of Noosa the previous 24 hours and two games of footy being played prior to the main game, the ground at Weyba Rd was heavy to say the least . But a poor first stanza by the home side in the slippery and muddy conditions certainly didn’t help their cause. Poor skill errors by foot again plagued the local boys whilst their opponents were much steadier and precise with their finishing skills to jump to a four goal lead. The game ebbed and flowed closely around that margin for most of the afternoon before the Tigers came home with a wet sail thanks mainly to the efforts of key forward Aaron Wilson and pint sized wingman Will O’Dwyer who both bagged two goals to bring the margin to 8 points. Unfortunately for the Tiger supporters present, the Magpies were able to steady kicking the final 2 goals to run out deserving winners.

Noosa coach Adam Bovalino saying’
“We just have to get far better when we don’t have the ball.” Our defensive pressure is just non existent so we are allowing our opposition to use the ball well. That part of our game just has to improve. I mean every game we have played for the most part we can move the ball every bit as a good as them. We are having moments or should I say little wins throughout games and we just need to turn them into bigger wins. Our character as a group will come through I have no doubt starting with our first Gold Coast trip to Surfers Paradise this weekend’
For the Tigers, Riley Buntain was just exceptional once again easily the Tigers best player and his first month of 2021 has been awesome. Warrnambool recruit Ben Fleming loved the Victorian like conditions to gather plenty of the footy whilst once again Ben Guthrie and Aaron Laskey stood tall in defence and on ball respectively. The Noosa Tigers tackle Surfers Paradise on the Gold Coast this Saturday with the main game starting at  1 pm.

The Mischief Hair women had a thrilling 1 point victory over the Ipswich Eagles in Ipswich las Saturday night. Against much bigger bodied opponents the Noosa girls finally got into gear in the final quarter to produce the type of running footy coach Graeme Burgen was looking for. Keirra Massoud was great for the victors with a very solid four quarter performance whilst Co skipper Cassy Young and youngster Sari Abbott were outstanding also, Gallio and Kendrick also amongst the best in a very enjoyable trip. Special mention to 16 year old Chloe Pitts who made her senior women’s debut and did everything asked of her!

And speaking of debuts ,a massive congratulations to gun Noosa midfielder Jai Fitzpatrick who made his VFL debut for Aspley against Frankston. Jai has been a star for the Tigers over many years and whilst has a stack of individual awards was a prime reason why Noosa were able to secure back to back premiership wins in 2019 and 2020. Great stuff Fitzy!

A big thank you to all who organised and attended our first Presidents Lunch last weekend with champion Footscray footballer and larrikin Doug Hawkins not letting anyone down with a typically  entertaining show.
Mark Berretta sports presenter form Channel 7s Sunrise program our next guest speaker on May 15th.
Good luck to all teams representing the Noosa Tigers this weekend!