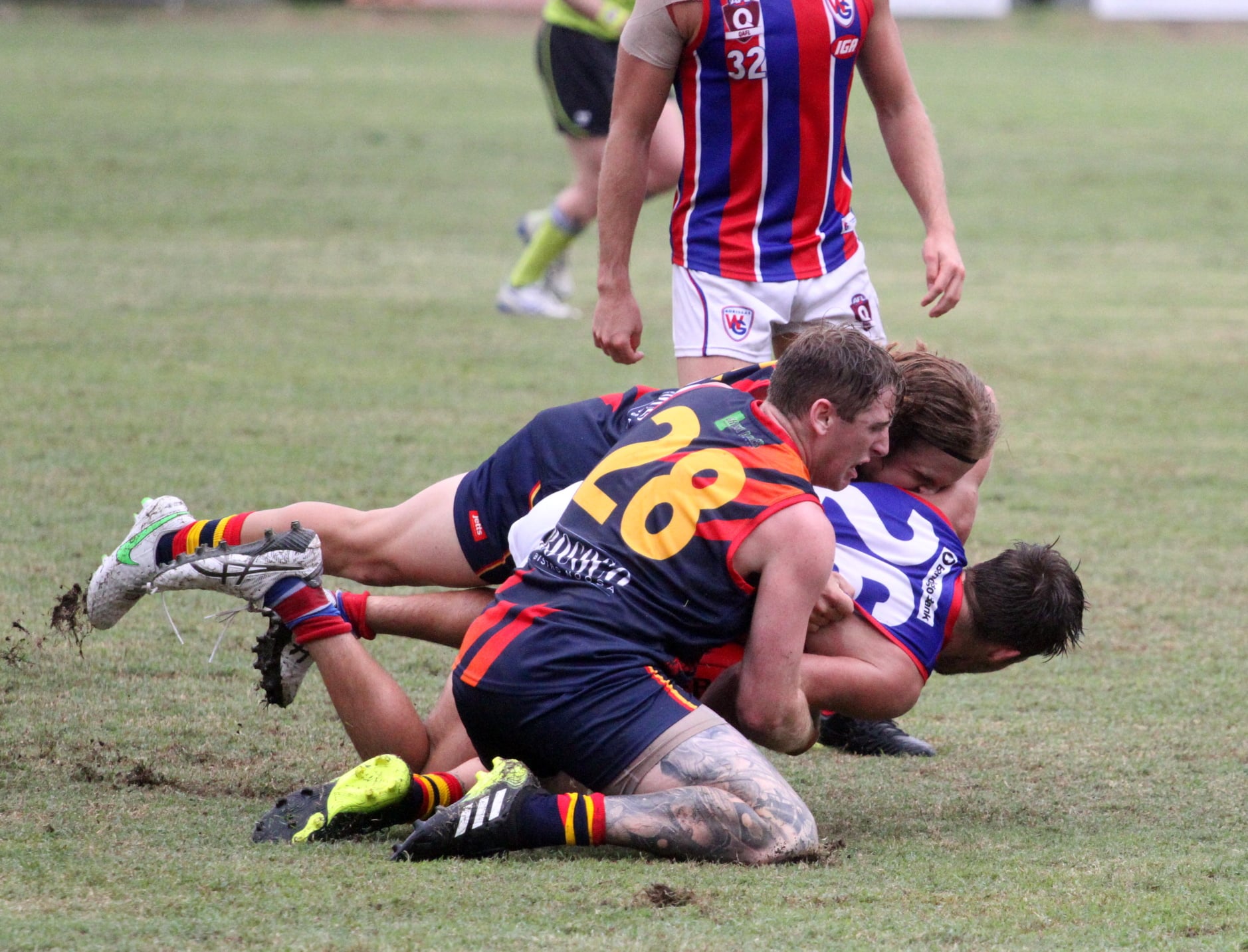 On a pretty miserable windy and dreary Easter Saturday the Rococo Noosa Tigers went down to Wilston Grange by the shortest of margins, one point. In front of a truly bumper crowd with just over two thousand people signing in through the Weyba Road front gates, the Noosa boys came from being 25 points down at the 21-minute mark of the final quarter to nearly snatching what would have been a memorable victory. However, it wasn’t to be and to be honest the better team ended up winning on the day.

After a frenetic opening stanza which included much off the ball niggle and some fiercely contested footy which saw both teams square at the first break, it was all the gorillas over the next two and a half quarters whose attack on the footy, cleaner ball use and discipline was superior to that of the Tigers. In fact, discipline played a huge part in the contest with the home side giving away 10 fifty metre penalties and had two free kicks reversed also. Something Tigers coach Adam Bovalino was pretty quick to point out at games end, “I’m pretty gutted really, our discipline was lousy the entire game and we really went away from our structures and the brand of footy we have been working on. I mean you can’t turn up and play ten minutes of footy at this level and expect to win. Grange deserve their win and were better for far longer than us today. Just really disappointed” Bovalino said.

On the other side of the fence Gorillas coach Brent Moloney (ex-Noosa player) was relieved and extremely happy to get over the line saying “gee they were coming at us late. I’m just relieved really. We were down to no rotations and were running on the spot there late but our efforts in those middle two quarters were super. We had 12 boys under the age of 21 out there today and these sort of games in front of big crowds will be invaluable for them. As usual at Noosa just a great atmosphere and really happy with the win”.

Plenty of good contributors for both sides with back flanker Cory Lobb the best 4 quarter performer for the Tigers. His rebounding and clean ball handling a feature when many of his teammates were fumbling around him. Riley Buntain was outstanding in the first half being just a Rock of Gibraltar in the last line of defence. Whilst he did have some moments he might like to forget late, his attack on the ball and ability to continually take the game on was great to watch. Ex-Echuca lad Riley Richard battled manfully in the ruck for most of the day whilst skipper Aaron Laskey never gave up. Young Mav Pettigrove had flashes of brilliance throughout the day whilst star on baller Brett Meredith was instrumental in the final quarter comeback with 13 touches. Up forward Aaron Wilson looked a real focal point for the Tigers finishing the day with 4 majors.

The Tiger reserves were thrashed in their first QAFL hit out with a lot of very new faces running around. I know Geoff Ogden and his entourage will work hard and improve his troops going forward in what should be an enjoyable year. Tommy Maher was the clear standout for the Tigers amassing over 30 possessions and certainly putting his hand up for senior selection.

The Shane Dawes coached Coolum-Noosa colts were outstanding in their 10-point win over the highly fancied Grange outfit. Young Cooper Langdon (son of Tiger champion Reece) was brilliant for the victors as was another Cooper in Cooper Airey-Bamback who bagged 3 goals and was super dangerous the entire day.

The Senior men’s group have a bye this weekend before being back at Rococo Oval to face state league heavyweights Palm Beach. Our women have a practise match at home this Saturday from midday against North Shore!

A massive thank you to all involved in putting on the Easter Saturday game which I really hope continues as the atmosphere was amazing!

For all other news regarding the Tigers just google ‘Noosa Tigers’ and head to our website or Facebook pages!

We might have gone done but by no means were we disgraced!